Inside the Elementary School Where Drug Addiction Sets the Curriculum 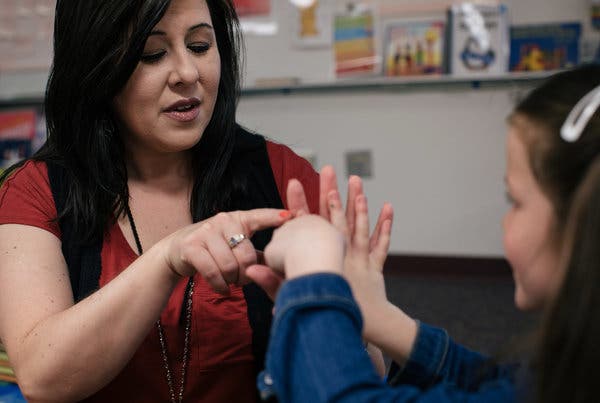 MINFORD, Ohio — Inside an elementary school classroom decorated with colorful floor mats, art supplies and building blocks, a little boy named Riley talked quietly with a teacher about how he had watched his mother take “knockout pills” and had seen his father shoot up “a thousand times.”

Riley, who is 9 years old, described how he had often been left alone to care for his baby brother while his parents were somewhere else getting high. Beginning when he was about 5, he would heat up meals of fries, chicken nuggets and spaghetti rings in the microwave for himself and his brother, he said. “That was all I knew how to make,” Riley said.

Riley — who is in foster care and who officials asked not be fully identified because of his age — is among hundreds of students enrolled in the local school district who have witnessed drug use at home. Like many of his classmates at Minford Elementary School, Riley struggles with behavioral and psychological problems that make it difficult to focus, school officials said, let alone absorb lessons.

“If you’re worried about your parents getting arrested last night, you can’t retain information,” said Kendra Rase Cram, a teacher at Minford Elementary who was hired this past academic year to teach students how to cope with trauma. Over the past nine months, she led several classes a day, and met every week in one-on-one sessions with up to 20 students who have experienced significant trauma.

Indeed, the classroom is becoming the battleground in the war against drug addiction where the next generation will be saved or lost in Ohio, which in 2017 had the second highest rate of opioid overdose deaths in the country.

Earlier this year, Gov. Mike DeWine proposed $550 million in student wellness funding for schools like Minford Elementary, including a drug prevention curriculum that focuses on “social and emotional” learning — exercises intended to teach students how to cope with the consequences of an opioid epidemic that has ravaged their community and shows no signs of abating.

In Minford, the toll has been exacting: Last academic year, four kindergartners lost parents to fatal overdoses and a fifth had a parent killed in a drug-related homicide. Some of the children were in the same room with their parents when they died.

“We have all these kids who are in survival mode,” Ms. Cram said.

Minford Elementary is not like typical schools. At this small campus in rural southern Ohio, there is a dedicated sensory room stocked with weighted blankets, chewable toys and exercise balls. Children who were born dependent on drugs, as well as others with special needs, can take time to jump on a trampoline or calm down in a play tunnel, sometimes several times each day. In class, students role-play in lessons on self-control, such as blowing bubbles and then waiting to pop them, and anger management, while also learning calming strategies like deep breathing techniques.